Mariposa María Teresa Fernández (1971–) is a Puerto Rican poet and performance artist born and raised in The Bronx. She was the first in her family to graduate from college, having earned a BA and MA at New York University. Mariposa's poetry, which often intertwines Spanish and English lines, meditates on empowerment, identity, family, all through a Bronx lens.

Mariposa has authored Born Bronxeña: Poems on Identity, Love & Survival (2001) and is featured in multiple anthologies. Her work has also appeared on a variety of programs produced for HBO, PBS, Lifetime TV, and BET, and she has performed for the United Nations World Conference Against Racism, the Essence Music Festival, and the Black Enterprise Women of Power Summit. Mariposa is an accomplished educator and has also worked towards women's empowerment through a variety of outlets. Her honors include a Van Lier Fellowship, an El Comité Noviembre’s Lo Mejor de Nuestra Comunidad Award, and recognition from the nonprofit El Maestro.

The collection is organized in the following four series:

2) Writings by Mariposa, which is comprised of poetry and prose works authored by Mariposa.

3) Writings by Others, which contains poetry and other works written by other Bronxites.

4) Photographs, which includes photographs of Mariposa and others.

5) Vieques Struggle, which includes documents and photographs from Mariposa's participation, with other Bronxites, in the successful struggle during the late 1990s and early 2000s to dismantle the U.S. military bases on the Isla de Vieques, an island and municipality of Puerto Rico.

7) Scrapbooks, which includes 1 scrapbook from Mariposa's travels to Vieques and the main island of Puerto Rico.

Folder containing fliers and promotional material from Mariposa's performances in 1997.

Folder containing fliers and promotional material from Mariposa's performances in 1998.

Folder containing fliers and promotional material from Mariposa's performances in 1999.

Folder containing fliers and promotional material from Mariposa's performances in 2000.

Folder containing fliers and promotional material from Mariposa's performances in 2001.

"Ode to the Nuyorican" 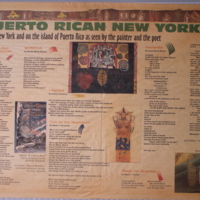 "Ode to the Nuyorican," the first published poem of Mariposa Fernández, published in New York Newsday on June 11, 1995, in a feature spread with poetry by other Puerto Rican poets.

That Kiss, a chapbook of a poem written by Bronx-based award-winning poet Sandra Garcia Rivera, friend of Mariposa Fernández. 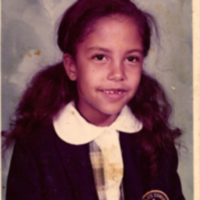 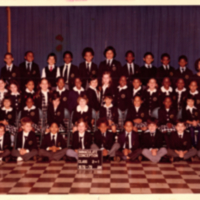 Second-grade class photo of Mariposa Fernández class at Immaculate Conception School, located at 760 East Gun Hill Road. Mariposa is in third row from bottom at the far right. Her twin sister is on the same row, third from left. 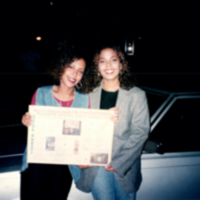 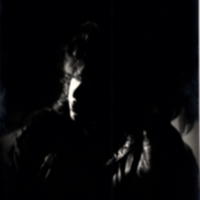 Photograph of Mariposa Fernández taken by Mariposa for a photography class in high school. 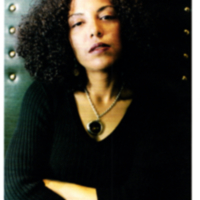 Photograph of Mariposa Fernández taken for professional and promotional use. 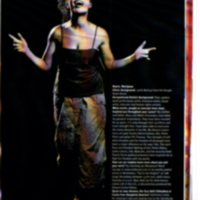 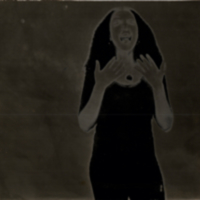 Ntozake Shange as a boxer 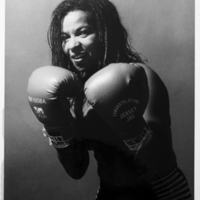 Photograph of Ntozake Shange as a boxer, photographed by Adál Maldonado and dedicated to Mariposa Fernández on the occasion of her wedding to herself on August 11, 2001. Among attendees was actress Rosie Perez. Retouched to mitigate water damage by…

Mariposa Sings to Lolita Lebrón on Her Birthday

Recording of Mariposa singing to famous Puerto Rican Nationalist Lolita Lebrón on the occasion of her birthday.

Recording of Poetas Pa' Vieques, an event held on June 13, 2000, organized by Bronx poets Mariposa and her twin sister MelleSoul and held at Café Largo, 3387 Broadway. The event was in support of the liberation struggles of the Puerto Rican island of…
View all 20 items