Esperanza Martell was born to Nationalist parents in Bayamón, Puerto Rico, a colony of the U.S., in 1946. Her family was part of the forced economic migration of Puerto Ricans in the early 1950’s to the U.S. She has confronted and dealt with all the ills of being a poor, working-class, Afro-Taína woman in a racist, classist, and patriarchal society. Her life’s experiences make Esperanza all the many things she is: a human rights activist, an educator, community organizer, trainer, life-skills transformative counselor, mother, poet, and artist. Her life’s work has been to work closely with political activists and organizations to promote anti-oppression work, sustainability, the transformation of capitalism, and healing in communities of color. Since the late '60’s she has worked for the independence of Puerto Rico, to end the U.S. military occupation of Puerto Rico, and to free Puerto Rican Political Prisoners. She has been part of many militant Puerto Rican organizations: El Comité, El Frente Unido Pro Presos Políticos Puertorriqueños, the National Congress for Puerto Rican Rights, the NY Vieques Committee, El Comité Puertorriqueño Contra la Represión, Afirmación Puertorriqueña, ProLibertad, 36 Mujeres for Oscar, las Lolitas, and more.

One of her many passions is training poor working-class women of color, youth, and their allies to transform their lives, community, and the world. She was one of the co-founders of Casa Atabex Aché, a Women of Color Self-Healing Center in the South Bronx. She has also worked with various NYC-based Women’s Organizations and in Puerto Rico to end male violence, U.S. militarism, and colonialism. These groups include the Latin Women's Collective, the International Working Women’s Day Committee, the Committee to Honor Puerto Rican Women, and Bohio Atabex Elders Council. In 2009, Esperanza founded the Urban Atabex Organizing and Self-healing in Community Training Network. She facilitates healing in community circles, trainings, and workshops, using her own culturally-based techniques for emotional self-healing, empowerment, and organizing. Her trainings focus on Critical Thinking to dismantle capitalism, white supremacy, and patriarchy; basic organizing skills; conflict resolution; civil disobedience and direct action; coalition building; life-skills; and self-care for the long haul.

Esperanza has worked on many human rights social justice issues from a class, race, gender, anti-capitalist colonial lens. Her work has spanned all areas of organizing in community-based organizations, schools, city agencies and radical organizations dealing with education, health, and police violence. As a board member of the Brecht Forum, The Marxist School, 1990–2005, she coordinated the Popular Education Institute, Paulo Freire: Education for Liberation Workshops for over 15 years. She is an active supporter and stands for the freedom of Mumia Abu-Jamal, Leonard Paltier, and all political prisoners. As an internationalist she has worked with the peoples of Vietnam, South Africa, and Palestine for their freedom. Since the 1970’s she has organized civil disobedience trips with the Venceremos Brigade and IFCO/Pastors for Peace to end the U.S. economic blockade and the travel ban on Cuba. She loves the Cuban people’s will to stay free and believes a different world is possible. Esperanza believes that: “We who hold up the banner of revolution need also to hold up the banner of revolutionary ethics and values. Freedom is not free, we pay for it with our word and integrity.”

During the period 1987–2020 she taught and advised at many CUNY colleges, as well as at Pacific and Smith College. Hunter College’s Silberman School of Social Work was her home College. She taught and advised students from a race, class, and gender intersectional perspective, specializing in organizational development, team building, leadership skills, conflict resolution, diversity training, transformative counseling, and alternative healing. She holds a B.A. from City University of New York and a M.S.W. from Hunter College School of Social Work. She has published essays and poetry, including "'In the Belly of the Beast': Beyond Survival," The Puerto Rican Movement: Voices from the Diaspora (Temple University Press, 1998). As a Revson Fellow at Columbia University (2003–2004), she studied Peace and Human Rights education from a gender perspective. She was a Visiting Scholar at the Center for Puerto Rican Studies at Hunter College. Esperanza has been honored and recognized for her work in New York and Puerto Rico by many Organizations. In 2002, the Puerto Rican Working Women's Organization of Puerto Rico gave her the Peace and Social Justice Award and El Comité Noviembre awarded her the Best of our Community Award. She lives in Washington Heights with her son Amilcar Loi Alfaro-Martell.

As an artist, Esperanza’s Ceramic Sculpture de Terra y Mar has allowed her to find new ways to express her ideas about life, her African and Taíno heritage, women's culture, freedom, peace, and spirituality. Throughout her life, Esperanza has mentored generations of women and men, young and old, of every ethnicity and culture. She always leads by example.

In Esperanza's own words: “My vision of love for all people generates my desire to restructure this society. We need to go beyond the cause at hand and strive to sustain our work for the long haul, creating new leaders, strengthening existing ones and building a broad citywide and worldwide community that will mobilize millions for peace, the sustainability of the plant, and economic justice.”

The collection is organized in the following four series:

4) Writings by and about Esperanza, which includes Esperanza's published writings as well as pieces published on Esperanza.

5) Clippings about Esperanza, which includes digital material related to Esperanza's art and activism. 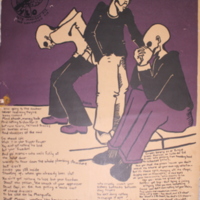 Digital image of poster by Young Lords Organization, with an illustration of heroin addicts by Denise Oliver and a poem by Felipe Luciano. This poster was gifted to Esperanza Martell by Professor Terry Mizrahi of the Silberman School of Social Work…

Rompiendo Puertas (Break and Enter), a movie made by the Thirdworld Newsreel Collective in New York City about "Operation Move-in," an action that Puerto Rican and Dominican families organized to reclaim vacant housing in Manhattan's Upper West Side.

Esperanza Martell, "In the Belly of the Beast": Beyond Survival

Article written by Esperanza Martell, "'In the Belly of the Beast': Beyond Survival," originally published in The Puerto Rican Movement (Temple University Press), in which Esperanza relates her life and experience as an organizer in a variety of…

Discussing Ancestral Trauma, and the historical significance in restoring indigenous spirituality, a sit down discussion with Esperanza Martell.
View all 7 items