Joseph W. McCarthy (1915–1980) met Jackie Robinson in the mid-1950s and helped Robinson utilize the papers in this collection to write a series of three articles published in LOOK Magazine in 1955 (also included in this collection). McCarthy was a prominent free-lance writer and editor in New York City during the 1940s–1970s. He began his career in Boston as a reporter and sportswriter. During World War II, he was Managing Editor for the U.S. Army publication, Yank the Army Weekly, until 1945. During those years he lived in the Parkchester section of The Bronx with his young family.

In the following decades, McCarthy worked as a free-lance writer for publications such as Life, LOOK Magazine, and Holiday, and he authored, edited, or was ghost writer of eight books that included the 1961 memoir, Firsthand Report, by Sherman Adams, about Adams's years in the Eisenhower White House; the letters of the comedian Fred Allen—Fred Allen's Letters (1966); and a book on President Kennedy, Johnny We Hardly Knew Ye (1972).

The collection consists of the following six series:

2) Newspaper Correspondence and Clippings, which includes letters and clippings about the Brooklyn Dodgers and their minor league teams from various members of the press around New York City, the U.S., and Montreal. Of special interest are the letters between prominent sports editors of Black newspapers, like Wendell Smith, and Branch Rickey, manager of the Brooklyn Dodgers.

3) Negro Baseball Leagues, which is comprised of clippings about, correspondence from, and other documents on players and teams in the various "Negro leagues." The material provides an insider view of Branch Rickey's early scouting of Black baseball players as well as the formation of the short-lived United States League. Most of the letters in this series from the earliest African American members of the Dodgers, like Roy Campanella or Don Newcombe, deny the allegation that the players had breached contracts with their previous teams.

4) Jackie Robinson, which includes correspondence to, from, and about Jackie; one publicity photograph of Jackie [PH-ROBINSON.1]; various documents about Jackie's public appearances; and the transcript of Jackie's testimony to the House Committee on Un-American Activities.

5) Campaign Against Jim Crow in Baseball, comprised of letters, petitions, postcards, and articles urging Branch Rickey to draft African American players to the Dodgers and thus challenge the Jim Crow policies of the American and National Leagues, which completely excluded Black players at the time. Much of the earliest material in the series, from 1944, comes from people or organizations in some way affiliated with or favorable to the Communist Party (C.P.U.S.A.), like Benjamin J. Davis, Jr., the New York City councilman representing Harlem; Paul Robeson; the National Maritime Union (N.M.U.); the Furriers union (I.F.L.W.U.); the National Negro Congress; etc. Indeed, Communists in New York and elsewhere took a leading role in the struggle to end Jim Crow practices in professional baseball, and their efforts were eventually successful because they were able to build a very broad coalition around the issue, one that included other less radical civil rights groups, organized labor, artists, academics, and various religious bodies and leaders. This series also contains letters of congratulation, prodding, and encouragement after Branch Rickey drafted Jackie Robinson to the Dodgers' minor league team in Montreal (the Royals) in 1945, as well as a handful of explicitly racist letters objecting to Rickey's decision.

*** This is also the series in this collection that contains material directly related to The Bronx, including a number of letters and postcards sent from Bronxites in protest of Jim Crow in baseball. Of particular interest is a letter sent by Lilyan Jiggetts, the secretary for Councilman Davis. Lilyan Jiggetts lived in the United Workers Cooperative Colony ("the Coops"), located at 2700 Bronx Park East, and was involved in various progressive organizations and causes during the 1940s and 1950s. (She was later involved, for instance, in the left-leaning National Council of Arts, Sciences and Professions.) Audley Moore, better known as Queen Mother Moore, also lived in the Coops during these years and claims in multiple oral histories that she was very involved in the effort to end Jim Crow in baseball (although there is no material directly from her in this collection).

6) Joe McCarthy and LOOK Magazine, which includes information about Joseph W. McCarthy and the series of articles that he wrote with Jackie Robinson in 1955.

Letters from Jackie Robinson to Branch Rickey of the Brooklyn Dodgers attesting that Jackie was not under contract with the Kansas City Monarchs prior to being drafted by the Dodgers.

Letters from Councilman Benjamin J. Davis Jr. to Branch Rickey of the Brooklyn Dodgers arranging a meeting about ending Jim Crow in baseball; also includes a letter from Lilyan Jiggetts, Davis's secretary, who resided at the Coops, or United Workers… 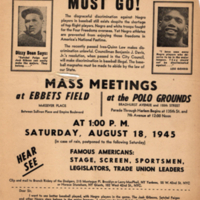 Letters from various Bronxites to Branch Rickey of the Brooklyn Dodgers urging an end to Jim Crow in baseball with reference to an article published in the Daily Worker on July 14, 1944.
View all 4 items