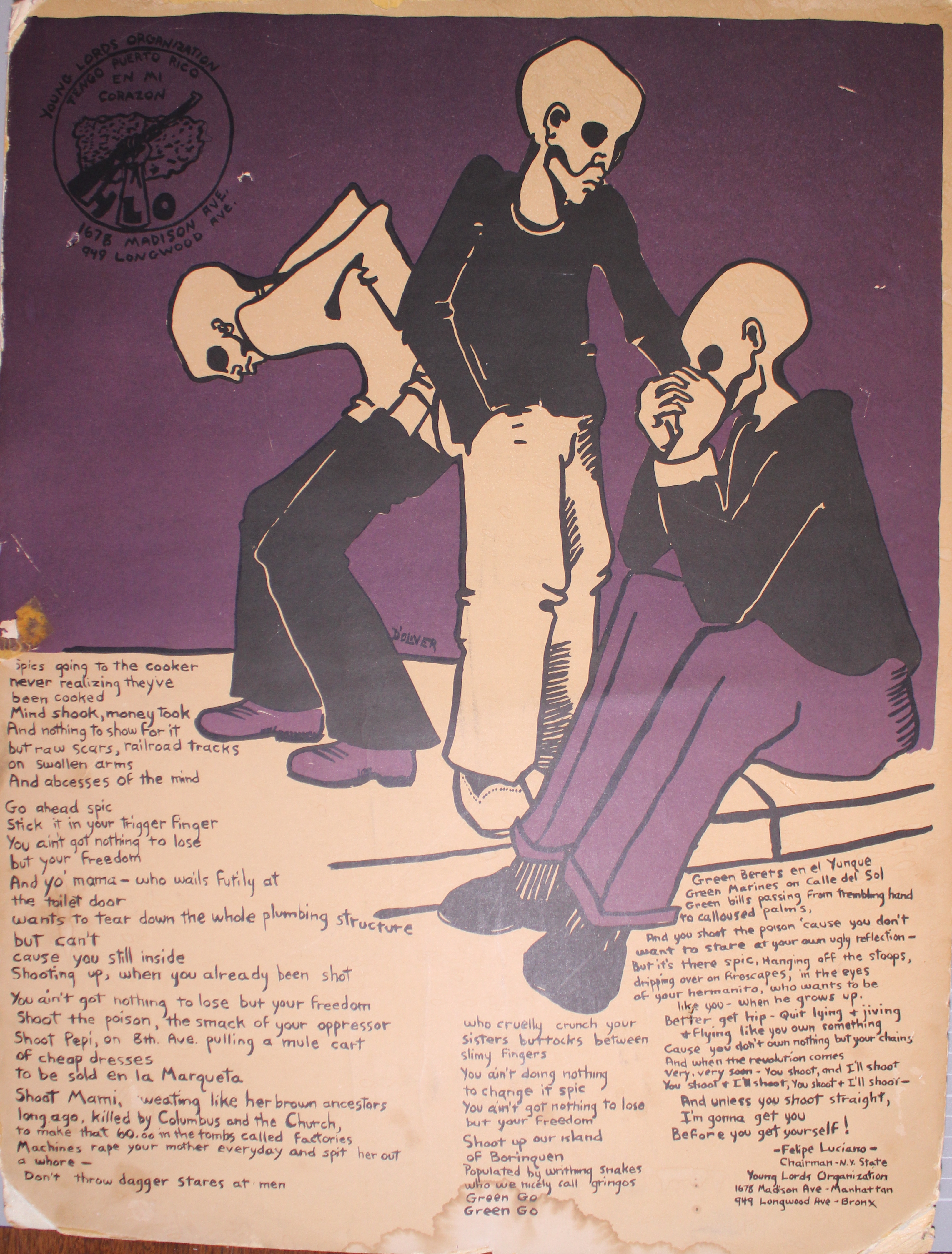 In 1969, Felipe Luciano and other Latino and Black young adults founded the New York branch of the Young Lords Organization, later renamed the Young Lords Party (“Felipe Luciano,” n.d.). Among the founding members were Denise Oliver, later a member of the Black Panther Party and influential activist, as well as other women (Rich 2020). Based in the barrios of the South Bronx and East Harlem, the Young Lords dedicated their work to serving and empowering their communities.

The Lords took note of what urgently needed to change in their communities and campaigned for justice, only to be met by the deaf ears of the city government. Historian Johanna Fernández documents the Young Lords as they identified tuberculosis, lead poisoning, asthma, drug addiction, and domestic violence as “the most common diseases of poverty of the North American ghetto” (Fernández 2020). After successfully illuminating the roots of these social injustices, public health became a central focus of their mission.

Like other hospitals around New York City, Lincoln Hospital poorly served its primarily working-class Black and Puerto Rican patients. Gloria Cruz, health lieutenant of the Young Lords, spoke out for the community and denounced the capitalist way in which the hospital operated, treating its patients as second-class (Narveaz 1970). Lincoln Hospital had been long in need of repairs by that point in time, and word of new renovations had been going on for years with little action towards the actual repair. On July 14, 1970, the Young Lords occupied Lincoln Hospital (Narveaz 1970). Fernández (2020) explains that the Young Lords exposed the “discrimination and inequality in the delivery of healthcare among Puerto Rican and Black American residents in the South Bronx, one of the country’s most impoverished and decaying districts.” During their occupation of Lincoln Hospital, the Lords outlined demands for the hospital's future. Such demands included the quick renovation of the hospital, more access to preventative care, more accessible testing for various illnesses, an in-house childcare center for patients, and better rehabilitation programming (Navereaz 1970). The occupation of Lincoln Hospital was the catalyst for the actualization of the justice the Young Lords had in mind for their community.

Dramatized in the poster shown above, months following the occupation, the Young Lords began to turn their attention even more to the pain that drug addiction caused in the South Bronx. They created what Fernández (2020) describes as “what would become one of the principal acupuncture drug-treatment centers in the Western world” at Lincoln Hospital. The clinic remained open until 1978, but the Young Lords' acupuncture technique is still in use today through the National Acupuncture Detoxification Association (Ricciulli 2021). The Lords identified the sources of poverty and injustice in their community and created long-lasting solutions that better our society and, more specifically, helped their local communities.